If you’ll remember, upon accepting her Emmy, Griffin said: “”A lot of people come up here and thank Jesus for this award. I want you to know that no one had less to do with this award than Jesus…Suck it, Jesus. This award is my God now.” The TV Academy and E! then announced they would not air Griffin’s comments.

Green is angry at Kathy Griffin for telling Jesus to “suck it” and wants Griffin to know that Jesus’ death is directly related to winning that Emmy. 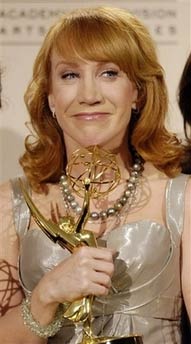 Reports Green: “Now I could have been mildly insulted at that and turned the other cheek, as the founder of Christianity taught. But then she went on to say ‘Suck it, Jesus. This award is my God now.’ Needless to say, she offended me and millions of other Christians. I don’t know what went through her mind and why she would think that was cutting edge or even funny. But first, I want to actually show you that, in fact, Kathy Griffin is wrong. Jesus had everything to do with her winning that award. And here’s the reasoning. Jesus died on a cross 2,000 years ago. His dying words were, ‘Forgive them Father for they know not what they do.’ He died and they buried him in a rock cut tomb. Three days later, as the Bible says, he rose from the dead. That day is what Christians celebrate as Easter…

…After the resurrection, Christianity began to take off like wildfire, spreading from the Middle East northward to Europe and westward into Ethiopia. In 300 A.D. Emperor Constantine accepted Christianity and it beccame the religion of Europe. Rome soon became the seat of the faith. After several years of human failings, the church went through conflicts and quite a few unbiblical years — the crusades and the inquisition to name just two. Out of that came the Reformation — the reforming of the Church, sort of a back-to-basics Bible and the Gospel of Jesus Christ. Out of the Reformation emerged a vision of law by Samuel Rutherford, called Lex is Rex, Law is King. From that, others devised a secular version that is used to help lay the foundation of government for a new land called America. Ninety-four percent of America’s founding era documents mention the Bible; 34 percent quote the Bible directly. The idea of bringing unity to the universal is a particularly Biblical concept….

…The freedoms we enjoy in this country to speak freely and to live freely are directly related to that man who died on a cross 2,000 years ago.”

So there Kathy Griffin!

Aside from the astonishing fact that this is being reported from an allegedly mainstream news outlet, isn’t Green simply arguing that Jesus gave Griffin the right to tell him to suck it?