A new report from GLAAD reveals that LGBT representations on prime time scripted shows will decline for the second straight year. 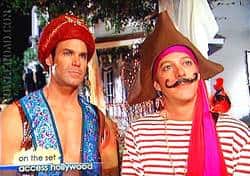 GLAAD took a look at 650 characters in 87 scripted shows from ABC, CBS, NBC, FOX and The CW and determined that 1.1% of series regular characters (that’s seven out of the 650) represent lesbian, gay, bisexual, or transgender people.

According to GLAAD, “The seven LGBT regular characters appear on five scripted programs: Brothers & Sisters, Desperate Housewives, Ugly Betty, The Office and the midseason series Cashmere Mafia. Six of these seven characters are on ABC, with no lead or supporting LGBT characters scheduled to appear on CBS, FOX or The CW.”

Said GLAAD President Neil Giuliano: “While we acknowledge there have been improvements made in how we are seen on the broadcast networks, most notably on ABC, our declining representation clearly indicates a failure to inclusively reflect the audience watching television. Striving toward diversity isn’t merely the responsible road to take for broadcasters, but as many of television’s highest-rated programs demonstrate, it’s also good for business. One need only look at the growing viewership of cable networks to see how inclusive programming can attract a wider audience.”

The media watchdog did find that 13 semi-regular recurring characters are scheduled to appear on shows during the upcoming season.

Cable, however, is a different story. Says GLAAD: “A total of 40 series regulars were counted across 21 scripted comedies and dramas scheduled to air on mainstream cable networks this season; 15 more than were counted last year. These numbers in part reflect a continued commitment to diversity effectively demonstrated by mainstream cable networks such as The N, FX, HBO, Showtime, and BBC America. Cable networks Logo and here! create additional original scripted programming for a predominantly LGBT audience.”

This is the 12th year GLAAD has produced the study.