The Advocate‘s interview with Hillary Clinton in which she discusses both the lesbian rumors and her position on civil unions vs same sex marriage is now online. 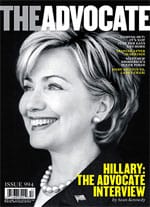 Another excerpt:
—
As any good therapist would say, no partner is perfect. At least Clinton’s willing to try. “I cannot promise results,” she says to me. “I can only promise my best effort. I can only promise to do everything that I can do to make the case, to put together the political majority, to take the message to the country, and I will do that. But there are no guarantees in life or politics.”

So, I say to her, even if the negative feedback is deafening, would you still push forward on repealing “don’t ask, don’t tell”? “I’m certainly going to continue to push forward,” she says. “But again, I can’t guarantee that the negative feedback will go away. The president is not a king, despite George Bush’s efforts to be one…and don’t forget, there’s another set of agenda items too. We’ve got ENDA and hate crimes.”

“If they reached your desk,’ I press, ‘you’d promise to sign them?”

“Absolutely, because as president I would be trying to get them to my desk,” she says with an exasperated laugh. “That’s the whole point!”
—

The Object of Our Affection [the advocate]