Members of Detroit’s Triangle Foundation will stage a protest from 11-3 on Saturday outside a resort hotel in East Tawas, Michigan, for its failure to assist a lesbian who was allegedly assaulted there at the beginning of September: 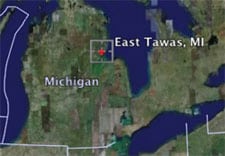 “Investigators reported that a male guest, in his 60s, allegedly attacked Michigan resident Angela Potter during her Sept. 8 stay. The man reportedly used anti-lesbian slurs against Potter, police said Thursday. When Potter asked a hotel staff member to call police, the employee reportedly agreed to call but never did. An hour later, a bruised Potter phoned police herself, investigators said. Police responded, then turned the case over to local prosecutors for review. On Wednesday, prosecutors said they had issued no arrest warrant in the case. Both victim and suspect are out-of-town residents, police said. ‘Both of them were bumped, bruised, scraped and cut,’ said East Tawas Police Chief Dennis Frank, reviewing photographs this week. ‘It appeared they got an equal share.’ Neither victim nor suspect sought medical attention, Frank added.”

Said Triangle Foundation Staff Member Melissa Pope: “There is no excuse – none – for the way the hotel treated Angie. We are calling on Tawas Bay Beach Resort to issue a public apology and at least a refund to her.”