Jurors in the trial of Anthony Fortunato and John Fox learned of the instant messages that were sent in an online exchange between Fortunato and slain Brooklyn interior designer Michael Sandy hours before he was lured to his robbery and eventual death on Brooklyn’s Belt Parkway. 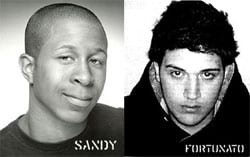 Fortunato, using Fox’s email account, had sent Sandy a message saying, “We can go to gay beach, or if you wanna buy a room, I guess u can get one for like ($)100 8 hrs.”

Sandy replied, “No don’t have loot.”

Fortunato’s defense lawyer Gerald Di Chiara has been attempting to use Fortunato’s recent disclosure that he is gay as a potential shield against a hate crime conviction in Sandy’s murder.