In the months since Tim Hardaway reacted to John Amaechi’s coming out by declaring “I hate gay people,” comments that reverberated through the media and caused him to lose a place at the NBA’s All Star Festivities, the former Heat player has been attending and working with the YES Institute, an advocacy center for LGBT youth. 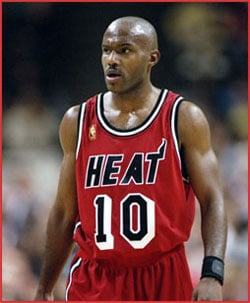 According to the AP, “The group, founded in 1996, seeks to prevent teen suicides while boosting the self-esteem of children and keeping them free of violence and discrimination.”

When he learned of the institute, Hardaway decided to check it out. Says the former pro: “I was scared out of my … mind. I didn’t know how they were going to act toward me. But you know what? They welcomed me with open arms. That eased a lot of my nervousness.”

Hardaway says he wanted to take steps following the homophobic incident to change himself. He says he has not given interviews for many months because he did not want people to think his work with YES was a “publicity stunt or a quick fix to an image problem.”

Says Hardaway: “I just wanted to go in and get educated, that’s all. Get educated on what I said and why I said those things. I’m working on understanding it now. I’m not really trying to make amends. I’ve been there trying to get help. “I had no idea how much I hurt people. A lot of people.”

Martha Fugate, the director of YES, has praised Hardaway in a press release: “Thanks to his honest albeit misguided reaction, Tim did find his way to YES Institute and the education he got was not just about others, but about himself. Because he is a role model, perhaps other people will also learn — hopefully before bad consequences happen to them.”