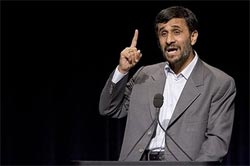 “…the gay community has worked to educate people via Web sites and dialogue with our friends and families. But we’ve found that the most effective way of changing people’s minds is coming out. When people see us as reasonable humans, their negative views of homosexuality are shattered. I can honestly say there’s been a change in the way Iranians view us now. Gay life in Iran isn’t as underground as it used to be. We have gay parties with heterosexual guests — and even our parents! We have places where we can congregate — in coffee shops, special park areas and even certain offices. Many more homosexuals are willing to come out these days. Activists estimate that .5 percent of the Iranian population is homosexual, bisexual or transsexual. But we weren’t surprised by Ahmadinejad’s comments about gays at Columbia University. What else could he say? We stone homosexuals in Iran because that’s what God wants? It was a joke, but he gave the only answer he could…”