From the Austrian paper Wiener Zeitung: 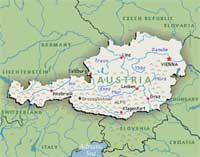 “Justice minister Maria Berger of the Social Democrats (SPÖ) has presented her proposals for registered partnerships of the same-sex. The so-called working paper, drawn up with the coalition partner, the People’s Party (ÖVP), foresees couples formally providing evidence of their relationship at a local registry office. Same-sex couples would be entitled to many of the rights and have the same obligations as heterosexual couples who are married. One of the aims of the proposed legislation is to avoid discrimination.”

The Deutsche Presse adds: ” The so-called registered partnership shows a number of parallels with traditional marriage law, complete with similar rights and duties, but was no ‘marriage light’ Berger stressed and was independent of current marriage legislation. A right for adoption is not envisaged, separation can be either by mutual consent or court decision.”