At a press conference earlier today, Rep. Barney Frank restated his position on an Employment Non-Discrimination Bill that does not include transgender people, The Advocate reports: “In remarks at a press conference on Capitol Hill this morning, Frank said that a sexual orientation-only ENDA could pass in the House with a margin of 15 or 20 votes, but that a transgender-inclusive bill wouldn’t even garner an up-or-down vote on the floor of the chamber due to the lack of political support.” 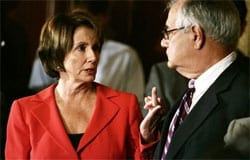 Frank called the anger over the sexual-orientation-only bill “counterproductive” and said that opponents “can’t handle the truth unfortunately.” Said Frank: “Should we kill the whole bill? I have a very profound difference with people who say we should…I do not think you deny people protection if you can. A sexual orientation-only bill would be very helpful.”

While he applauded efforts by the LGBT community lobbying for a trans-inclusive bill, he expressed dismay that such efforts had come so late in the process, according to The Advocate: “Frank asserted that pulling the sexual orientation-only bill would send a bad message to the country and would only hurt the LGBT rights movement. ‘The headline will be, ‘Pelosi pulls gay rights bill from agenda,’ that they didn’t have enough votes to pass it. I don’t understand how that helps us.'”