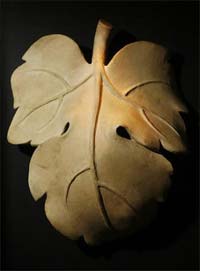 Major sex exhibit opens in London: “The first item on display is a 50 centimetre (20 inch) plaster fig leaf which was used to hide the private parts of Michelangelo’s “David” from Queen Victoria in the 19th century.”

Florida’s Okeechobee County School Board bans “sex-based clubs” to halt formation of gay-straight alliance: “In a unanimous vote Tuesday, school board members adopted the policy that bans any club that is ‘sex-based or based upon any sexual grouping, orientation or activity of any kind.’ District officials have said the new policy, which takes effect immediately, aims to ban clubs that challenge the district’s abstinence-only education.”

Madonna cuts $100 million+ deal with Live Nation. NYT: “The deal, which was first reported yesterday on The Wall Street Journal’s Web site, is the latest example of how tough times for record labels and concert promoters have set off a free-for-all over the rights to the various revenue streams created when a musician becomes a star. Instead of sharing in only one piece of the income — say, CD sales — companies are angling to share in all of an artist’s business lines, like publishing, merchandise sales and endorsement fees.”

Young Frankenstein‘s Broadway transition experiences pre-opening controversy: “The latest members of the Down-on-Mel Club are some members of the Dramatists Guild – furious at him for not paying his dues – and a small but vocal group of gay people who work backstage and bristle at what they believe are some insensitive jokes in the show.” 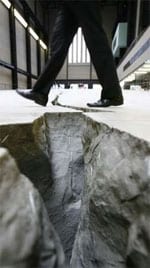 Into the great wide open: three visitors have had to be rescued after falling into Doris Salcedo’s gigantic crack at the Tate Modern. More on the vast crack that is “Shibboleth”.

Jeffrey Montgomery, director of Michigan’s Triangle foundation, steps down after 16 years: “Spurred to bring awareness to anti-gay violence, he and two friends founded the advocacy group the Triangle Foundation in 1991, and Montgomery was suddenly a point person for the area’s gay community. ‘We were making enough noise to get noticed,’ said Montgomery, who remembers living off his savings when the organization got started. Today, the Triangle Foundation is one of the state’s leading gay rights and advocacy organizations with a $1 million budget and programming that ranges from victim services to camps for gay, lesbian and transgender youth.”

Iranian President Mahmoud Ahmadinejad’s aide says the translator at Columbia misquoted his remarks about gays: “‘What Ahmadinejad said was not a political answer. He said that, compared to American society, we don’t have many homosexuals,’ presidential media adviser Mohammad Kalhor said.”