Representative Barney Frank will appear on Michelangelo Signorile‘s Sirius radio show at 5:15 pm EST today to talk about the controversy surrounding the ENDA legislation. Jon Davidson of Lambda Legal will be on before Frank, starting at 3:30 EST. You can get a free three-day pass to Sirius here. 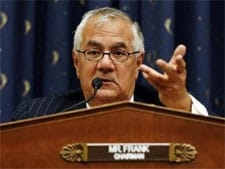 A week ago, Frank announced that transgender-inclusion in the LGBT anti-discrimination legislation would be cut because the bill would not have enough votes to pass with transgender people included.

This, understandably, set off a firestorm in the LGBT community.

On Monday, the House voted to postpone action on ENDA pending further assessment of reaction from the LGBT community.

I’ve tried to gather some of the pieces I’ve run across regarding the controversy:

Sole transgender HRC board member Donna Rose on her resignation over HRC’s position:
Donna Rose statement [out for democracy]

Waymon Hudson: Accept No Substitutes: Stripped Down Version of ENDA is Dangerous and Wrong [bilerico project]