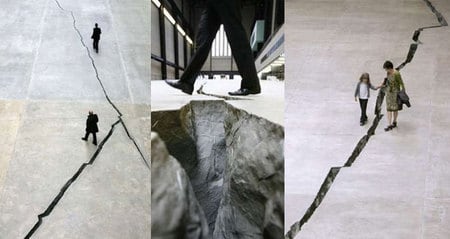 A new exhibit in the Turbine Hall at the Tate Modern in London consists of a 548-ft. fissure, a tiny crack that widens from one end of the vast hall to the other. The installation, called “Shibboleth” by its creator Doris Salcedo, is a metaphor for racism, according to the Telegraph, but its implications are much greater:

“It is as though the foundations of the whole building have been shaken by an earthquake, so that by implication the vast space we are standing in is fundamentally unsafe. When you peer down to look deep into the void, you see that the sides of the interior are covered with wire mesh of the kind that is used to seal off borders and control crowds.”

According to the Tate, “A ‘shibboleth’ is a custom, phrase or use of language that acts as a test of belonging to a particular social group or class. By definition, it is used to exclude those deemed unsuitable to join this group.”

The museum and artist are choosing to let the process of its creation remain a mystery, yet the exhibit will be closed next year when the crack will be filled in: “There is a crack, there is a line, and eventually there will be a scar and that scar will remain. It will remain as a memory of the work and also as a memorial to the issues Doris touches on.”

“Shibboleth” opens today and will be on display through April 6, 2008. (slideshow) 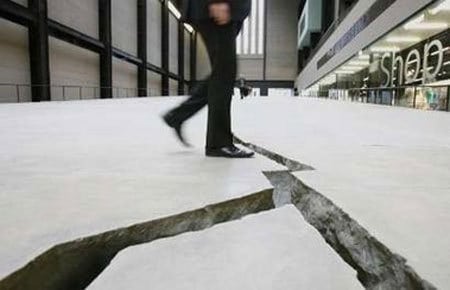