Let California Ring, a project of Equality California and a coalition of over 45 national, state and local organizations, has launched a new campaign aimed at educating the public about marriage equality.

It’s said to be the first campaign directed at a broad audience that is undecided about same-sex marriage, and the first TV spot (click to play, above) places the issue in the context of a heterosexual wedding. 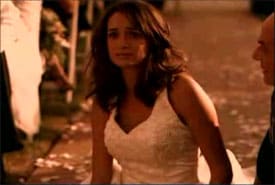 The spot follows a bride on her wedding day as she prepares to walk down the aisle. Her journey to the altar is obstructed by various obstacles as she struggles to unite with the man she loves. Finally, she is physically stopped from reaching her groom by members of the congregation as the spot asks, “What if you couldn’t marry the person you love? Every day, gay and lesbian couples are prevented from marrying. Support the freedom to marry.”

Previous Post: « NYT Looks at the Plight of the Gay Elderly
Next Post: Colombian Artist Salcedo Creates Rift at the Tate Modern »