Here’s a transcript of last night’s Matt Lauer interview with Idaho Senator Larry Craig if you missed it, and a short clip. 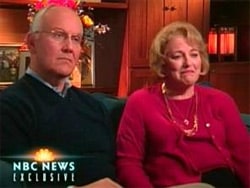 The interview was, for the most part, a rehash of what we have already heard before from Craig, though this time the home fires were burning and Craig was surrounded by a defense wall of artfully-arranged family photos that filled the front of the frame in many camera shots, no doubt strategically placed to boost Craig’s image as a devoted husband and father. Craig and his wife seemed poised, unshaken.

And Lauer’s interview was a softball event. It seemed odd that in his 49 years, Lauer had never come across the term “cruising” before – “whatever that means”. The gay “lifestyle” was referred to time and time again. Also annoying were the constant apologies with which he prefaced his questions.

Near the end, some fresh territory: 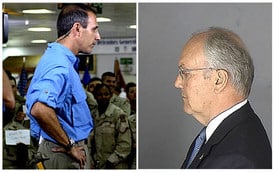 What is a shame is that no efforts were made to point out that the gay “lifestyle” to which they refer — the clandestine naughtiness in airport men’s rooms — is an activity taken on, to my knowledge, by men who identify as straight. Being gay is an orientation, certainly not something that is chosen, which “lifestyle” of course implies. What is a choice is to not come clean about one’s orientation. What is a choice is for a lawmaker to work feverishly for “family values” and against gay rights while engaging in homosexual liaisons in airport men’s rooms.

Tom Shales at the Washington Post brings up some good points about this in his criticism of the interview:

“Craig himself brought up his voting record and said of homosexuality, ‘I don’t approve of the lifestyle.’ Lauer should have followed up; why did he call it a ‘lifestyle’ and what about it does he disapprove of? At one point, reading from Craig’s history, Lauer said the records included ‘a guy who claims you ‘cruised’ him — whatever that is.’ This, it seemed, was Lauer’s way of winking into the camera and saying, ‘I’m not gay.’ You hardly have to be gay in 21st-century America to know what the phrase ‘cruising’ means. It was even the title of a movie starring Al Pacino. Lauer needs to worry less about his own image and more about getting valuable information when conducting an interview. It seemed highly likely that Craig and his wife agreed to sit down with Lauer because they knew they had nothing, really, to fear.”