According to a press release from the National Gay & Lesbian Task Force, “Tomorrow’s scheduled House committee action on a version of employment non-discrimination legislation without protections for transgender people has been postponed. A statement from Speaker Nancy Pelosi, Chairman Miller, Representative Frank and Rep. Baldwin said this would ‘allow proponents of the legislation to continue their discussions with Members in the interest of passing the broadest possible bill.'” 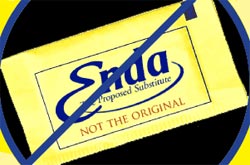 NGLTF Executive Director Matt Foreman added: “Today’s announced postponement of the scheduled House mark-up on the transgender-stripped Employment Non-Discrimination Act takes us in a positive direction. In this defining and morally transformative moment, our community has come together in an unprecedented way and said once and for all that we will leave no part of our community behind. We appreciate that a decision has been made to slow down this process, and we look forward to working with Congress over the upcoming weeks to educate them as to why this substitute bill strategy is seriously flawed, convince them to abandon this strategy, and instead advance a fully inclusive ENDA later this month.”

Also, according to the NGLTF, a letter signed by 90 national and state LGBT organizations was sent to Congress today urging them to reject legislation that excludes transgender people.

There is also a petition online urging Congress to pass ENDA as it was originally envisioned, with all LGBT people included.

Previous Post: « Fred Thompson: My Plan to Keep the Gays from Marriage
Next Post: Hugh Jackman Entertains at the Beach »