Republican presidential candidate Fred Thompson reiterated his stance on gay marriage today, calling it an attempt to preserve “traditional” marriage while at the same time limiting the role of the federal government. 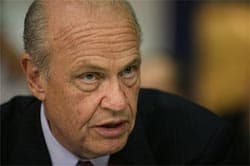 According to the Associated Press, “Thompson favors a constitutional amendment that bars judges from legalizing gay marriage, but also leaves open the door for state legislatures to approve the practice. He said social and religious conservatives who would prefer an amendment that also bars legislatures from legalizing gay marriage can live with his view.”

Said Thompson, who claims he has “met frequently” with “influential social conservatives” he won’t name: “Everyone I have talked to in my meetings like this, the answer has been yes. I think they prefer their own wording. They are primarily concerned about marriage being a union between a man and a woman. What I have done is fashion something that says judges can’t [legalize gay marriages] any more…It’ll stop the process in its tracks because it’s all judge-made. No state legislature accompanied by a governor’s signature has gone down that road.”