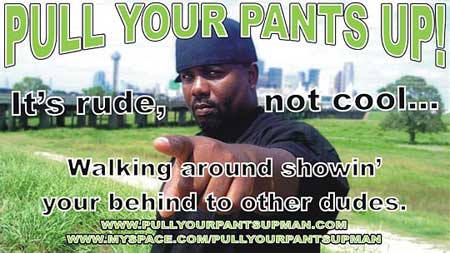 In an effort to target the trend of saggy hip-hop pants, the City of Dallas has launched a homophobic billboard and hip-hop campaign that targets low-riding jeans wearers by pressuring them to stop the trend because it’s a signal that you’re gay. 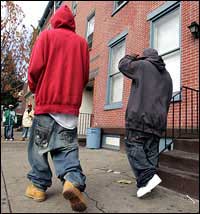 The “Pull Your Pants Up” campaign features billboards donated by Clear Channel which read: “Pull your pants up! It’s rude, not cool… Walkin” around showin’ your behind to other dudes.”

If that isn’t bad enough, the campaign has a signature song recorded by rap artist Dooney Da’ Priest containing lyrics that say, “You walk the streets with your pants way down low/ I don’t know/ looks to me you on the down low.”

Dooney Da Priest talked to FOX News: “Got a lot of partners of mine, they come out of jail, they let me know that means you’re basically easy, you’re lettin another man know that you’re available.”

Dallas Deputy Mayor Dwaine Caraway talked to NPR about the campaign: “The No. 1 mission is very simple: pulling up your pants. That’s all we want. We don’t want to throw folks in jail because they wear their pants low. So we’re going to make it man’s law and not city law.”