Elderly gay people are at risk of neglect due to homophobia and many experience discrimination and abuse with no one there to defend or assist them. The New York Times today looks at the growing number of advocacy programs for the gay elderly and tells their stories, some of which can be heartbreaking: 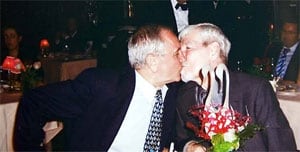 “In one nursing home, an openly gay man, without family or friends, was recently moved off his floor to quiet the protests of other residents and their families. He was given a room among patients with severe disabilities or dementia. The home called upon Amber Hollibaugh, now a senior strategist at the National Gay and Lesbian Task Force and the author of the first training curriculum for nursing homes. Ms. Hollibaugh assured the 79-year-old man that a more humane solution would be found, but he hanged himself, Ms. Hollibaugh said.”

They also take a multimedia look at Emile Dufour, 70 and Fred Riley, 75, (pictured) together for 20 years, and married in 2004, and the fear that clouds their future:

“The pair have been together for two decades and married in 2004. But their default position, should they need nursing care, will be to hide their gayness, as they did for half a lifetime, rather than face slurs and whispers. ‘As strong as I am today,’ Mr. Riley said, ‘when I’m at the gate of the nursing home, the closet door is going to slam shut behind me.'”

Aging and Gay, and Facing Prejudice in Twilight [nyt]