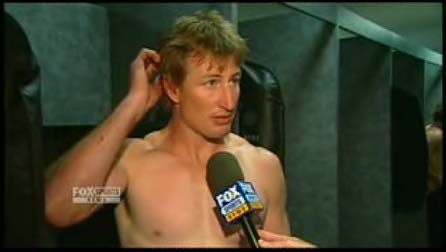 The Australian rugby league and televised sports are at the center of a controversy after Michael Robertson of the rugby league team Manly Sea Eagles inadvertantly exposed himself on national television while FOX Sports cameras were rolling in the team’s locker room. It may not have caused such a fuss except for the fact that Robertson, joking around with his teammates, performed a split-second background routine that has been dubbed the “wang dance” by Australian media.

In the footage, which quickly made its way to YouTube, FOX Sports interviews player Steve Menzies, and Robertson appears briefly in the background doing what others have called “the helicopter” or “the windmill”.

According to the Daily Telegraph, “The scandal has led to the sacking of a Fox Sports employee and could eventually lead to sweeping changes to media access to NRL dressing rooms. An angry Manly camp has called on the Rugby League Professionals Association to intervene – calling for all television cameras to be banned from dressing rooms until 45 minutes after fulltime.”

Check out the footage, after the jump…

Below The Equator, They Swing Them Counterclockwise [deadspin]

Previous Post: « Singaporeans Call for Decriminalization of Gay Sex
Next Post: Marc Jacobs: Naked in Paris with a Poltergeist Tattoo »