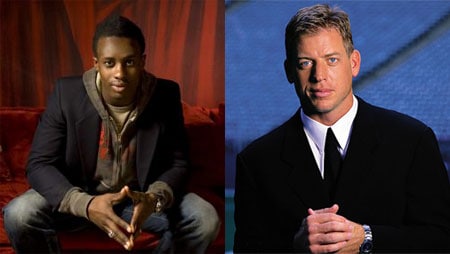 Lloyd (above left) was apparently upset about a comment which former Cowboys quarterback-turned-announcer Troy Aikman had made during Saturday’s Redskins-Packers game in which Aikman claimed that a pass intended for Lloyd was “tough but catchable”.

Aikman’s comments apparently irked Lloyd, for in an appearance on a popular sports podcast airing on 106.7 WJFK in Washington, D.C. and relayed to the web, Lloyd resurrected rumors started by sports analyst Skip Bayless in 1996 in his book Hell-Bent, that Aikman is gay.

Lloyd laughs off the exchange, saying “Troy’s speculating and I’m speculating.” But not before a whole round of speculation about other NFL players occurs. Lloyd is quiet on the other players, but says, “I don’t know, hey, I don’t know, hey, if those guys want to say something about me I’ll have something to say about them, but for now it’s about Troy Aikman.”

Lloyd presents no solid evidence of anything regarding Aikman, but the exchange demonstrates the difficult atmosphere gay players must face in the NFL. When a player’s sexuality is seen as something that can blatantly be used against them is it any wonder none of them are open about it?

The exchange begins around the 7:47 mark. A transcript (courtesy of D.C. Sports blog) follows after the jump.

Junks: I loved seeing that, Brandon, because people say, ‘Oh Brandon doesn’t care, he’s smiling after the game,’ and I think how can you say that about a guy who got in trouble for smashing his helmet on the sideline, you know what I mean? It’s incongruous, it doesn’t even make sense.

B-Lloyd: It’s tough. It’s a tough, it’s a tough, it’s a fine line between when a guy’s showing passion and when a guy doesn’t care, you know what I mean? Some guys take losses differently, some guys are able to smile, that’s the way guys get over it. Some guys are pissed off for a couple days or till the next game. Guys take it differently. It’s tough. It’s so much outside input here. I see why people are confused.

B-Lloyd: You know what I mean? So it’s tough, man. And I don’t believe Troy Aikman anyway. He wasn’t man enough to admit his personal life situation while he was a player.

B-Lloyd: So I have a tough time believing him.

Junks: What do you mean his personal life?

Junks: Do you know that that’s true?

Junks: [tumult] You’re just throwing him under the….NFL players don’t….He’s like married….He’s just speculating….Are you saying that you know something we don’t?

B-Lloyd: No, I’m speculating, just like he’s speculating. You guys are crazy. (Laughter)

Junks: You’re the one who said it.

Naturally, like any good radio hosts, the Junkies bring the topic back later, as they’re going through a history of B-Lloyd’s quarterbacks and the name Jeff Garcia comes up.

Junks: Hey, what about what they say about Garcia?

Junks: What about that Aikman stuff, what’d you hear about Aikman, for real?

B-Lloyd: Oh you know, you know all those stories….

Junks: What about Kordell?

Previous Post: « One Million Attend Gay Parade in Rio
Next Post: Flaming Pope Photo Seen as Blessing from Beyond the Grave »