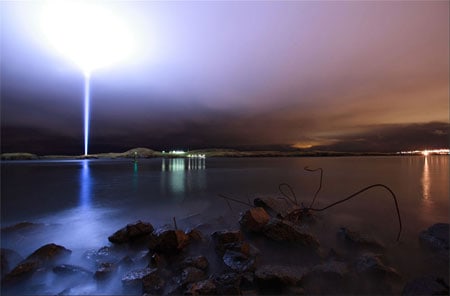 On Tuesday, Yoko Ono unveiled a monument in memory of John Lennon that she hopes will be a literal beacon of peace for the world. According to the AP, “The tower is a beam of light, radiating from a wishing well bearing the words “imagine peace” in 24 languages. The plan is for it to be lit each year between his birthday, Oct. 9, and the anniversary of his death on Dec. 8.”

The Imagine Peace Tower is located on Videy Island near Reykjavik, Iceland. Ono said Iceland was chosen “because it was a very eco-friendly country that relied on geothermal energy.”

Ringo Starr was there for the dedicated ceremony, which is below on the left. In the video on the right, Ono talks about the plans for the tower.