A new book on the 1962 University of Kentucky Wildcats football team which contends that a game between UK and rivals Xavier University was fixed is stirring up controversy over its gambling allegations. The author’s game-fixing claims, which are being disputed by players and the wife of the head coach at the time, were formed around an investigation which unearthed a less-disputed tale of local parties with Hollywood guests, most notably Rock Hudson, at which players would perform sex acts for money. 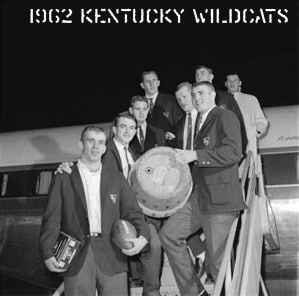 The Lexington Herald Leader reports: “According to [author Shannon] Ragland’s account, some UK players in the early 1960s became involved with two gay men who had moved to Lexington around 1959. The two men were luring players to their Lakewood Drive residence with offers of free food, alcohol and parties even before Bradshaw became coach, the book says. Eventually, according to Ragland, some players submitted to gay oral sex in exchange for money, receiving $200 or more for each act. At some point, Ragland writes, movie star Rock Hudson became involved through his friendship with one of the party hosts. (Hudson died of complications from AIDS in 1985.) Ragland contends that the players involved probably didn’t view themselves as taking part in gay sex. Rather, he says, they felt they were ‘gaming’ the situation. ‘It was like, ‘I’m getting paid for doing this? I’m putting something over on them,’ Ragland said. ‘Most of these guys were from rural areas and modest backgrounds. They had no real concept of homosexuality.’ Kay Collier McLaughlin, whose father, Blanton Collier, preceded Bradshaw as coach at UK, says Ragland’s account rings true. McLaughlin said a UK player told her about the Rock Hudson connection shortly before her father left UK, noting that she alluded to the gay-sex situation in her own 1985 book about her father. McLaughlin said she has ‘reservations’ about Ragland’s game-fixing suggestion, ‘But I don’t have any doubts about the Rock Hudson stuff.'”

Ragland alleges that because of these parties “boys…were in a position to be bought” either for the want of cash or due to threat of blackmail.