She’s the frontrunner, so is anyone surprised that the gay card would be pulled at some point? This time the lesbian rumors are nothing from her past at Wellesley, but whispers of a current affair with campaign aide Huma Abedin. Who’s whispering them? Well, Republican blogs (big surprise) and, apparently unnamed sources at Democratic rival campaigns. And, well, there’s no solid basis to them. I read about it last week and thought I’d let it sit, but it seems to be picking up traction elsewhere in the left-leaning press. 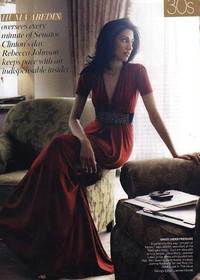 Harper’s magazine reports: “The hard-to-credit rumor of Hillary’s Sapphic excursions is being stoked by right-wing bloggers. They suggest that this supposed romance shows the candidate is not only a lesbian but consorting with terrorists, given that the Michigan-born Abedin is reportedly from a family brimming with known Muslims. But it’s not just Republicans who are pushing the story. Will Folks, a well-known blogger in South Carolina, reported yesterday that he’d ‘heard from sources at rival Democratic presidential campaigns who claim that they ‘know it to be true’ that Hill and Huma are romantically-involved.’ [Harper’s] called Folks, and he said that two different Democratic campaigns had told him about the alleged affair, but neither had ‘presented anything remotely resembling proof.'”

Harper’s adds: “Most stories that are too good to be true aren’t true, and Hillary having a lesbian affair with her sexy staffer falls into that category, whether you’re a Republican Hillary-hater or a Democrat who opposes (or is simply endlessly annoyed by) her. And even if it were true, Hillary’s not nearly as reckless or driven as her husband, so she’s unlikely to get caught.”

As you probably know, Clinton talked to The Advocate about the age-old rumors in September. She said: “People say a lot of things about me, so I really don’t pay any attention to it. It’s not true, but it is something that I have no control over. People will say what they want to say.”