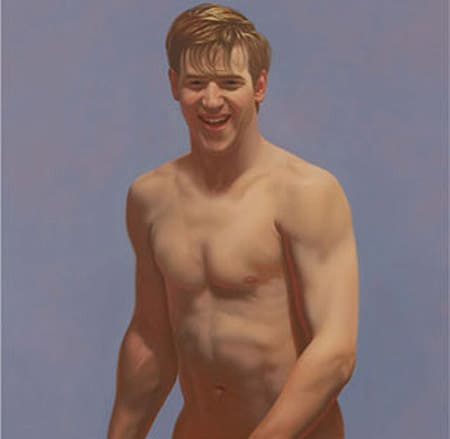 Must be the month for nude hockey players. Earlier in the month Toronto Maple Leaf Jiri Tlusty flashed his bits over the internet, and now a NYC exhibition is making headlines for its paintings of hockey players in the buff. 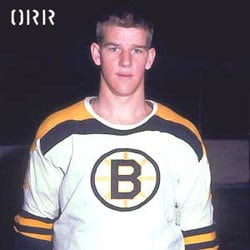 Kurt Kauper’s exhibit “Everybody Knew That Canadians Were The Best Hockey Players” features portraits, some entirely nude, of former Boston Bruins players Bobby Orr (above, and pictured here, back in the day), Derek Sanderson, and others.

Of the paintings, Kauper told the Boston Globe: “Inspiration struck after a visit to Paris. There, Kauper saw one of his favorite works, a 19th-century image of Napoleon ascending to heaven by Jean-Auguste-Dominique Ingres. In the work, the French general is nude. You certainly couldn’t do that nowadays – represent a cultural icon in the nude as a gesture of adoration and immortalization,” said Kauper. ‘That gets to how nudity is perceived today. It occurred to me that it would be interesting to try to make a painting of an icon in the nude and see what kind of response I got from viewers.'”

Discomfort is part of the point, however, said Deborah Kass, a curator who has worked with Kauper: “He takes these people we identify and idolize and presents them at their most stripped down, and because it’s a male nude it makes people incredibly uneasy. I really don’t know anybody else who is doing that.”

The installation can be viewed here. See the full Bobby Orr, after the jump…