Visionaire, the “couture” publication that last brought you Marc Jacobs’ butt served on a plushie doll, recently offered a preview of their next limited-edition #53, to journalists in Berlin. 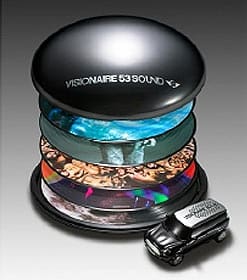 “The third Visionaire to focus on the senses (after earlier investigations of smell and taste), Visionaire Sound is round, shiny and black, with silver accents, just like the brand new Clubman car from the issue’s collaborator, Mini, owned by the German auto company BMW. And while Visionaire publisher Cecilia Dean said Mini gave the magazine’s team free rein in developing the Sound project, the Mini Clubman just happens to be pivotal to its implementation. ‘We liked the idea of doing 12-inch vinyl [records]. There’s something archaic to it, like the original Mini Classic. But while we originally wanted to do a portable turntable, it got incredibly massive and cumbersome,’ Dean explained. In what she described as a ‘eureka’ moment, someone suggested using a ‘vinyl killer’ — a little battery-operated VW camper that drives on a record and plays it. Producer Razyworks was willing to transform the traditional VW into a Mini Clubman, which is parked on five double-sided picture disks featuring images by Cindy Sherman, Nick Knight, Mario Sorrenti, Robert Longo and Inez van Lamsweerde and Vinoodh Matadin, among others. Insert the signature Visionaire battery from Maxell, and let the killer Clubman roll over one- to two-minute tracks from 116 highly varied sound makers. Emerging talents share the disks with big music, art, fashion and film names like Courtney Love, The Pet Shop Boys, U2, Robert Wilson, Maggie Cheung, David Byrne, Yoko Ono, Laurie Anderson, Helmut Lang, Linda Evangelista, Liza Minnelli, Malcolm McLaren, Miss Kittin, Marina Abramovic, Stefano Pilati and others. The limited edition of 4,000 copies carries a $250 price tag, and includes two CDs of the Sound content plus a booklet of images, credits and instructions.”

Previous Post: « Larry Craig Doll: I Am Not Gay, I Never Have Been Gay.
Next Post: Iowa Horserace: Clinton Talks to CBS, Nightline Follows Obama »