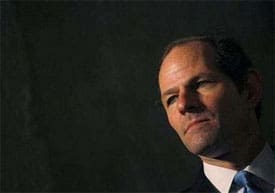 “‘One of the first things we’re going to do when [Senate Minority Leader] Malcolm Smith is [majority] leader is gay marriage,’ the [Post’s] witness recounted Spitzer as telling some 60 people who paid up to $10,000 each to attend the event in Greenwich Village Wednesday night. ‘Everybody applauded when he said that,’ said the witness, who was among senators, Democratic activists and lobbyists at a fund-raising event for the Senate Democratic Committee. It was held in the library of the elegant West 13th Street home of HBO’s ‘Oz’ creator Tom Fantana. Two other witnesses, including an elected official, said they couldn’t recall Spitzer’s exact language, but added that the governor suggested a Democratic-controlled state Senate would follow the state Assembly’s action this year in passing, for the first time ever, a gay-marriage bill.”

Spitzer’s spokeswoman reportedly denied he said it would be a “top priority” and there is no recording of the event, but the speech was at least enough to anger NY Senate Republicans. Said Senate Majority Leader Joseph Bruno: “Driver’s licenses for illegals and gay marriages are not what the people of New York want,” said John McArdle, spokesman for Senate Majority Leader Joseph Bruno (R-Rensselaer). This is Gov. Spitzer promoting another divisive issue. and it indicates that his priorities are all wrong.”

Previous Post: « Pastor Ken Hutcherson Back for Another Round with Microsoft?
Next Post: Tucker Carlson Has Not Beaten Up Any Gay Men Lately »