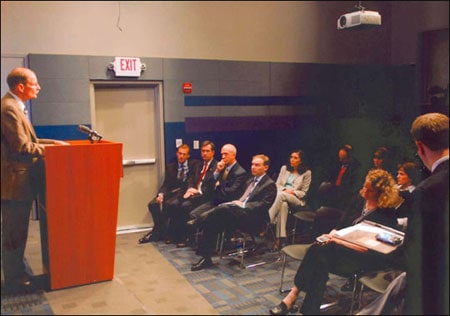 The former director of public affairs at the agency, John “Pat” Philbin told CBS News regarding FEMA’s fake news conference that “[he was] not aware that [Vice Admiral Harvey Johnson] knew what was happening and all of sudden staff were asking questions.”

A photo (above) they published Friday, however, exposes the news conference in all its fraudulence:

CBS reports: “Identified in the photo are staff members that Johnson works closely with on a daily basis…It was announced Thursday that an internal investigation had found that FEMA’s press secretary encouraged, and in some cases instructed, employees to pose as reporters and ask questions at the fake news conference.”

Philbin lost his post as the director of national intelligence over the incident.

Just Who Was At That Fake FEMA Briefing? [cbs]

Previous Post: « When You Were Young: Rufus Wainwright
Next Post: Norman Mailer, Tough Guy Who Didn’t Dance, Dies in NYC »