By now you’ve most likely heard that literary giant Norman Mailer died over the weekend in New York City. He was 84. This shot, via the Huffington Post, was taken by Timothy Greenfield-Sanders in 2003. 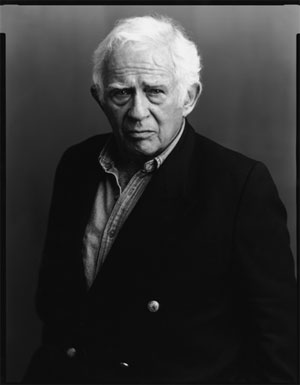 As the New York Times notes, “Mr. Mailer belonged to the old literary school that regarded novel writing as a heroic enterprise undertaken by heroic characters with egos to match.”

London’s Times adds: “Mailer came to be seen by the feminist movement as the antichrist of chauvinist piggery, a reputation that seemed richly deserved when the details of his marriage to Adele were laid bare in her subsequent book. She described how he punched her in the stomach when six months pregnant, how he urged her to take part in group sex then flew into jealous rages and ended up stabbing her. Yet somehow Mailer managed to subside into a reasonably respectable old age.”

The NYT publishes an old quote on Mailer from Gore Vidal: “Mailer is forever shouting at us that he is about to tell us something we must know or has just told us something revelatory and we failed to hear him or that he will, God grant his poor abused brain and body just one more chance, get through to us so that we will know. Each time he speaks he must become more bold, more loud, put on brighter motley and shake more foolish bells. Yet of all my contemporaries I retain the greatest affection for Norman as a force and as an artist. He is a man whose faults, though many, add to rather than subtract from the sum of his natural achievements.”

Mailer is to be buried at a private funeral for family and close friends in Provincetown, Massachusetts, where he spent much of his later life. Mailer’s novel Tough Guys Don’t Dance was set there. His east end residence is notable for being one of the few brick houses in the entire town. He once described Ptown to Jackie Kennedy as “the wild west of the East.”

I ran across a couple anecdotes in this Times Online remembrance that I thought were worth sharing.

The first: “The stories of his macho posturing are legion, from the time he dismissed America’s leading women writers as ‘fey, old hat, quaintsy and dykily psychotic’, to the day he encountered a passing punk while walking his poodles in Brooklyn. According to Peter Manso’s biography of Mailer, the punk incautiously suggested to the burly author that his poodles were homosexual. ‘Nobody’s gonna call my dog a queer,’ Mailer exploded, before throwing himself at the punk and almost losing an eye in the ensuing altercation.”

And the second: “In later years, he enjoyed reminiscing about life in New York in the 1960s and 1970s, when he failed to become the city’s mayor despite promising to stage gladiator contests in Central Park. He would wander the streets with Truman Capote, author of In Cold Blood, and get up to all kinds of trouble. He once described being led by Capote to a club named Corpse, which Mailer discovered to his horror had taken its name from a cadaver displayed on a slab in the middle of the dance floor. Mailer screamed at Capote in disgust, but his diminutive companion shrugged, ‘Oh Norman, don’t be angry, they change the body fresh every day.’ It turned out that the club had a deal with the city morgue.”