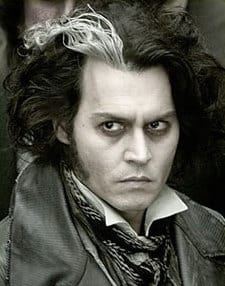 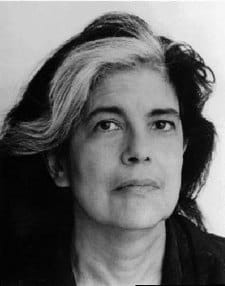 Ever have one of those visual cues you just can’t seem to shake? Everytime I look at the promo shots for the upcoming Sweeney Todd film starring Johnny Depp, all I see is the late intellectual Susan Sontag.

Depp talks about the look in the most recent issue of Entertainment Weekly: “The idea was that he’d had this hideous trauma, from being sent away, locked away. That streak of white hair became the shock of that rage. It represented his rage over what had happened. It’s certainly not the first time anyone’s used it. But it’s effective. It tells a story all by itself. My brother had a white spot growing up, and his son has this kind of shock of white in his hair. In those early meetings, what started to go into the look, before the white streak and any of that, was the eyes. As with any character, the history is there. It sounds really stupid, but I thought they needed to be far away and very close at the same time. They needed to have experienced too much, you know. That’s where the darkness came around them. These heavy rings around his eyes of purple and brown, this kind of awful fatigue and rage. It’s like he’s never slept.”