Project Runway‘s Jack Mackenroth, who revealed his positive HIV status on last week’s episode of the show, offered some clarification on his blog as to his new boyfriend Dale‘s negative HIV status in order to clear up misconceptions about HIV and rumors on the internet. 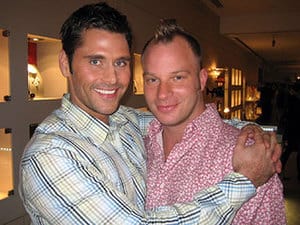 Said Jack on his blog: “I guess there are a lot of rumblings in the blogosphere about me and Dale and some concerns about our different HIV status. First I think its interesting that people just assume he is HIV negative–which he is. Just an observation. Anyway–I feel the need to address the issue since I am so open about my status. First of all safer sex is VERY easy to practice and doesn’t detract from the experience in any way. Beyond that if you are educated about HIV then you know that there are a myriad of things that two people of different HIV status can do sexually with no risk. I’m not going to delve into our sexual proclivities but all is good on the Jack/Dale front. Furthermore my viral load is undetectable which means that when they do a blood test they are unable to find any virus in my blood. That low level of HIV is due to the medication I take and regularly monitoring my status. This combined with safer sex practices allows two people with different HIV status to have a full, healthy relationship. I would also like to add that in the past I had 2 boyfriends for two years each and both of them were and are still HIV negative. Thanks!”

Me and Dale [jack mackenroth]