A team of researchers was able to alter the sexuality of fruit flies within a few hours by altering a key neurotransmitter in the flies’ brains which they had earlier determined factored into the sexuality of the tiny insects. 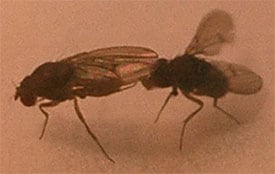 LiveScience reports: “‘Based on our previous work, we reasoned that GB mutants might show homosexual behavior because their glutamatergic synapses were altered in some way,’ Featherstone said. ‘Homosexual courtship might be sort of an ‘overreaction’ to sexual stimuli.’ To test this, the researchers genetically altered synapse strength, independent of GB. They also gave flies drugs to alter synapse strength. As predicted, they were able to turn fly homosexuality on and off, within hours. ‘It was amazing. I never thought we’d be able to do that sort of thing, because sexual orientation is supposed to be hard-wired,’ Featherstone said. ‘This fundamentally changes how we think about this behavior.’ The team figured fly brains maintain two sensory circuits: one to trigger heterosexual behavior and one for homosexual. When GB suppresses glutamatergic synapses, the homosexual circuit is blocked, the thinking goes. So they did more tests. As expected, without GB to suppress synapse strength, the flies no longer interpreted smells the same way. The smells in question come in the form of pheromones, chemicals that affect sexual behavior in much of the animal kingdom.”

These scientists might want to speak with scientists in the UK who used pheromones to halt the population explosion of brown-tailed moths. Men living and working at a Royal National Lifeboat Institute at Spurn Point in Yorkshire “were developing rashes and breathing problems from the poisonous hairs of the larvae blown in the wind” because there were so many moths. Once the pheromones were spread, the moths became confused and some were persuaded to be gay.

You may have missed…
Gaydar: Do You Have A Counter-Clockwise Whorl [tr]
Gay Flamingos Adopt Abandoned Chick in Britain [tr]
Researchers: Captivity Brings Out the Lesbian in Koalas [tr]
San Francisco Gay Penguins Move in, Improve Neighborhood [tr]