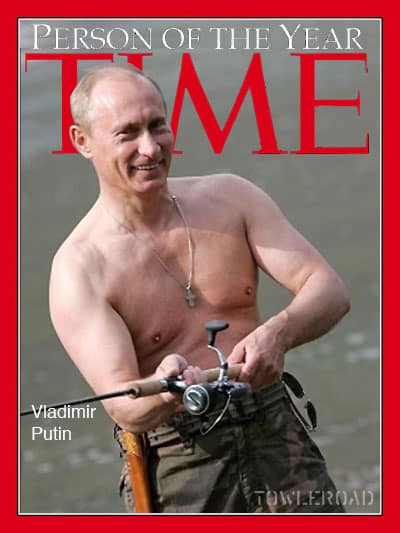 Time named Russian President Vladimir Putin its “Person of the Year” for 2007. As should be noted, that’s not necessarily an honor nor an endorsement. The image above is certainly not the cover Time chose, although it’s probably the most-published image of Putin all year.

Time wrote: “It is ultimately about leadership—bold, earth-changing leadership. Putin is not a boy scout. He is not a democrat in any way that the West would define it. He is not a paragon of free speech. He stands, above all, for stability—stability before freedom, stability before choice, stability in a country that has hardly seen it for a hundred years. Whether he becomes more like the man for whom his grandfather prepared blinis—who himself was twice TIME’s Person of the Year—or like Peter the Great, the historical figure he most admires; whether he proves to be a reformer or an autocrat who takes Russia back to an era of repression—this we will know only over the next decade. At significant cost to the principles and ideas that free nations prize, he has performed an extraordinary feat of leadership in imposing stability on a nation that has rarely known it and brought Russia back to the table of world power.”

On that note, let’s take a look back at what gay people in Russia endured under Putin in 2007. 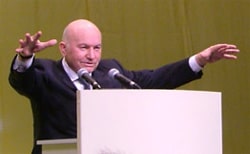 Moscow Mayor Yuri Luzhkov in January branded gay people “Satanic”, vowing that a Gay Pride parade would never take place in the capital city. Said Luzhkov: “Last year, Moscow came under unprecedented pressure to sanction the gay parade, which can be described in no other way than as Satanic. We did not let the parade take place then, and we are not going to allow it in the future…Religious thinkers throughout the world have said that the West has reached a crisis of faith. Some European nations bless single-sex marriages and introduce sexual guides in schools. Such things are a deadly moral poison for children.”

In February, it was reported that conscripts in the Russian military are often forced into prostitution by their superiors who demand the money they earn from it. CNN took a closer look at the story.

In March, the mayors of London, Paris, and Berlin criticized Moscow mayor Yuri Luzhkov’s stance on gay people, though the two openly gay mayors, Bertrand Delanoe and Klaus Wowereit were criticized themselves for not going far enough. 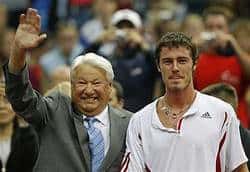 In April, former Russian President Boris Yeltsin died. Yeltsin’s Russia was arguably kinder to gay people than Putin’s. In order to get in the good graces of Western nations in order to become a member of the Council of Europe, Yeltsin joined post-Soviet republics Belarus, Estonia, Latvia, and Ukraine and decriminalized homosexuality in April of 1993. The move did away with a law that put gay citizens behind bars (and subjected them often to torture and correctional therapy) for up to five years if they were discovered.

In May, some government officials supported organizers of the gay pride parade scheduled for May 27th in Moscow. However, their message of support was drowned out by protestors at the panel who warned that if the parade went forward, “Moscow will drown in gay blood.” No comment from Putin. Two days later, officials reiterated their ban. 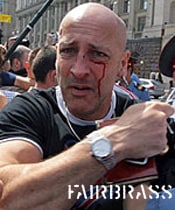 In late May, organizers attempted to hold the parade with international activists in attendance. It turned bloody and violent. British activist Peter Tatchell and Right Said Fred singer Richard Fairbrass were assaulted on camera. Tatchell and Fairbrass were both then arrested, along with Italian MEP Marco Cappato, German MP Volker Beck (who was assaulted at last year’s rally), the leader of GayRussia, Nikolai Alexeyev, and dozens of other activists. Thirty people were detained in all at what began as a peaceful demonstration meant to mark the 14th anniversary of the decriminilization of homosexuality in Russia. As soon as the demonstration began, a group of attackers, made up of ultra-nationalists and members of the ultra-Orthodox Russian church, set angrily upon the group. Activists were arrested while attackers walked free, and sources close to the activists told media outlets “[It is] becoming very clear that orders are being given to court and militia directly from [the] Kremlin.” 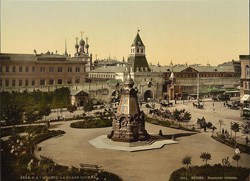 In June, Orthodox Russian youth groups began patrolling known public gay cruising spots in Moscow, in an attempt to deter gays from meeting with one another. The patrols were seen as a litmus test for broader ultranationalism.

Later in June, gay activists were detained at a sanctioned demonstration outside the European Union in Moscow. They were assembling to call on the European Union to impose a travel ban on Moscow Mayor Yuri Luzhkov over the human rights violations he has committed against gays and lesbians. Police used unnecessary roughness in arresting the protesters.

In July, a party cruise in Moscow was stopped momentarily by paramilitary police.

In August, photos of a bare-chested Putin fishing in the countryside were published (see above) that were seen as sensational propaganda intended to make Putin look like a macho man, but they drew comparisons to Brokeback Mountain. London’s Daily Mail reported: “Yesterday, the Russian mass-market newspaper Komsomolskaya Pravda published a huge colour photo of the barechested president, under the headline ‘Be Like Putin’. The picture illustrated a guide to the exercises needed to build up a torso like that of the Russian leader…Russian gay chatrooms and blogs were particularly intrigued by the photos. Some claimed that Putin, by stripping to his waist, was pleading for more tolerance of homosexuality in Russia – where gays and lesbians are for the most part forced to remain closeted.” They should be so lucky.

That same month, activist Nikolai Alekseyev was interrogated after suggesting that deputy of the State Duma Alexander Chuev, member of pro-Kremlin party Fair Russia, was a ‘gay, a coward and a hypocrite’. 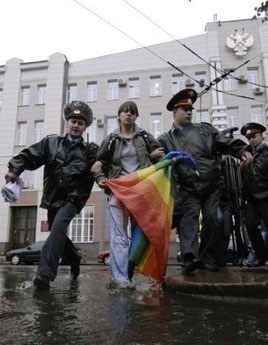 In September, Ten people, including the leader of Moscow’s Gay Pride movement, Nikolai Alekseyev, demonstrated outside the Ministry of Health and Social Development building in Moscow, and seven were arrested. The activists were protesting Russia’s law prohibiting the donation of blood by gay men, a policy echoed by various governments around the world, including the United States. Russia Today reported: “Mr Alekseyev says its unfair to compare gay men to drug users and sex workers, pointing out that there is no law preventing gay women from giving blood. He added that the health service is desperately short of blood, yet it is ‘stopping people giving blood for reasons that are incomprehensible.’…Mr Alekseyev questioned the legality of the arrests, saying there was no trouble at the demonstration and that the protesters ‘didn’t interfere with anyone.’ Alekseyev added that the protest was in no way connected to politics or the inflammatory Gay Pride parade, which takes place in Moscow every summer. He insisted Friday’s action was meant only to show the discriminatory nature of the law.”

In October, Patriarch Alexy II, the head of the Russian Orthodox Church, offered his opinion of gay pride to the Council of Europe, comparing homosexuals to kleptomaniacs. 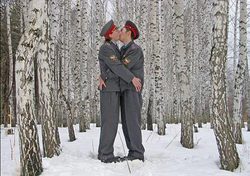 October also saw the ban of gay art. Russian cultural minister Alexander Sokolov banned an image of two policemen locked in a romantic kiss from appearing in an exhibition scheduled to go on display in Paris. The Guardian reported: “Mr Sokolov described the photo as political provocation and said he was pulling it, together with 16 other works, from a show at Paris’s Maison Rouge exhibition hall. The exhibits were all displayed in Russia this year at Moscow’s state-owned Tretyakov gallery. The minister also banned another work by the same irreverent group, Blue Noses, that shows Vladimir Putin, George Bush and Osama bin Laden cavorting on a double bed in their underpants.”

Finally, just this month, gay activists were arrested while protesting anti-gay Moscow mayor Yuri Luzhkov during the elections in Russia. The activists were detained for a period of three hours after which they were released. 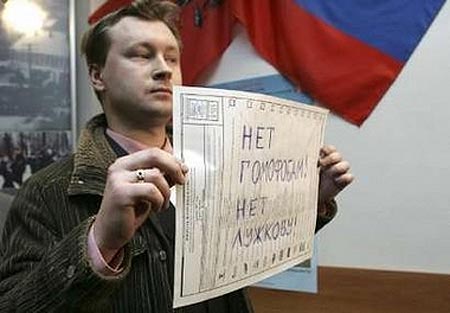