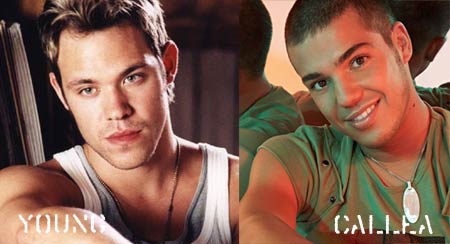 Showbiz Spy claims that gay 2002 Pop Idol winner Will Young has split with his boyfriend of two years Conor:

“The ‘Light My Fire’ singer, 28, has thrown himself into the party season and is on the look-out for another man – since breaking up with ex-boyfriend Conor a fortnight ago. The pair had been dating on and off for 2 years, but, according to Britain’s Mirror newspaper, Will, who won TV talent contest ‘Pop Idol’ in 2002, told pals it was definitely over when he partied at London’s trendy Bungalow 8 club.”

And down under, 2004 Australian Idol runner up Anthony Callea has broken up with his boyfriend of three years, according to Aussie site Same-Same:

“‘I am officially single as of a week-and-a-half ago,’ he said.’You know… shit happens. It’s onwards and upwards for me from here.’ The pair met during Idol in 2004 – Paul was the talent co-ordinator. After Callea lost to Casey Donovan, the pair moved in together. Then Vic Lorusso opened his trap about the pair live on air, outing Callea in the process. The rest is pop history. So who broke up with who? If Sydney Confidential’s source is anything to go by, it sounds like cracks had been forming for a while, and that it was Paul who eventually put his foot down. ‘Paul was besotted with Anthony but Anthony treated him like shit… He’s pretty arrogant and spoilt and Paul put up with it for a long time.'”