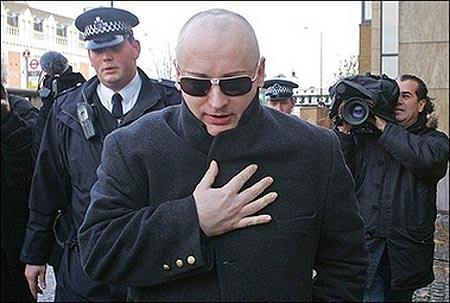 Boy George is set to begin a series of intimate concert dates around Britain on a tour called called Songs That Make You Dance and Cry. He talked to the Daily Mail about his arrests, his bitchiness, being gay, and his favorite thing in the whole world.

George, who was ordered in November to stand trial for allegedly falsely imprisoning a male escort (which he can’t discuss), says he’s tired of living a public life and says he’s fine being “a shadow of his former self.”

Says George: “That’s how I like it, and how I want to be seen. I hate talking about me. I think people have a fixed idea of me now. They think my life is miserable. But that’s not the case. It’s really sad if people see me [as seedy]. Just because somebody has kinky tastes doesn’t mean that they’re seedy. People who know me and love me would never call me that…I wanted 2007 to end, with a line drawn firmly under it, and move on. The last couple of years were s**t. I mean, I got arrested twice. I’ll be 47 in June. I’ve had enough. It affects everything in your life. I don’t ever want to see a policeman again. I have a New Year’s resolution. I’m going to try hard to become a shrinking violet.” 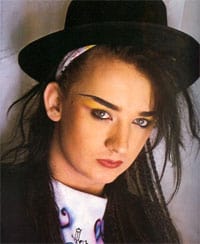 Of his arrest for cocaine possession in 2005, he confesses: “When that story came out, I wanted to hide under a rock. I was mortified. I was so disappointed in myself. But my first thought was: ‘My poor mother! She’s going to go crazy’. As it happens, she was great about it. The arrest had been so scary and I thought people were going to hate me. Once I was sweeping the streets, though, everyone was amazing – even the police.”

The singer has also used heroin, another chapter he deplores: “Do I regret the heroin habit? Of course I do. It’s not something I’m proud of. I used to be so arrogant about it until I realised that I was also destroying the people who loved me the most.”

George says he’s sorry if he seems angry, but his bitchiness is something he’s hoping to put away: “Do I seem angry? Well, I can get angry but I come from a very angry family. I thought [my father] was going to kill me [when I told him I was gay. But he just sort of went: ‘Don’t care. You’re my son. I love you… I open my mouth and bitchy things come out. I’m really trying to curb that. It doesn’t make me look good. I was reading some things I’d said and I sounded horrible. I had a big row with Elton John and David Furnish about some queeny remark I’d made. But I regretted it and apologised to David. He was so sweet about it. It was Elton. I thought: ‘Oh my God!’ He thanked me for saying sorry to David. As a result, I made up my mind then that I didn’t want to be seen as a bitch anymore. So I’ve stopped. End of…Now I confine my bitchy comments to my private life!”

The tabloid also asks him about relationships, and, more specifically, civil unions: “I suppose they’re a good thing, although that’s not something I’d want to do. In a way, it would feel a bit like trying to be the same as straight people. But I like being gay. I’m a very good queer. You grow up being called a poof at school – and by the teachers, I might add – and then, suddenly, you’re meant to feel accepted. Well, I can’t. It’s impossible.”

And finally, he reveals what makes him happiest: Being cuddled. That’s my favourite thing in the whole world.”

Boy George: why I like being a shadow of my old self [daily mail]