The Advocate‘s Brandon Voss attempts to quiz Diane Lane about her “big gay following” and, because she doesn’t really have one or isn’t aware of it, they end up talking about the gay men that are hot for her husband.

Says Lane: “I’m delighted to hear that [I have a gay fan base], but I have to say I’m more aware of my husband’s. That appeal? I understand it. But I think I turn a blind eye to my own because I get embarrassed or I’m shy or I don’t take compliments well. I can’t speak for [Josh], but I know that there are plenty of guys that I’ve been around who have expressed if not glee for me, then envy of me…I was blessed to have no previous impressions of him aside from meeting him, which is a much healthier way to start a relationship. I finally saw Goonies after we had already been together for, like, a year. Then I became jealous that I didn’t meet him when I was 15 and got very upset over anybody he knew before me — ever. [If I had known how great he was earlier in life] I’d have hunted him down with a harpoon and lassoed him to my thigh for the rest of my life. No questions, hands down — he’s worth 10 of any other comparable hot guy for me. And that works for me because I get excited every time I go home.”

Anyway, the trailer for Lane’s new movie Untraceable, which kind of looks like a Silence of the Lambs for the internet set, is above. It comes out on January 25th.

Shots below from January GQ, and if you haven’t seen No Country for Old Men, I highly recommend you get to the theater. 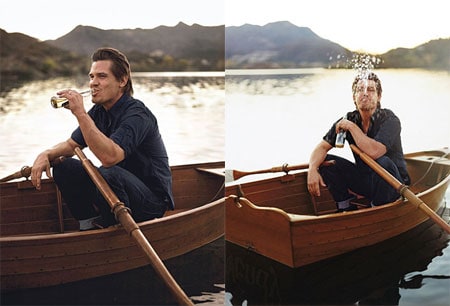