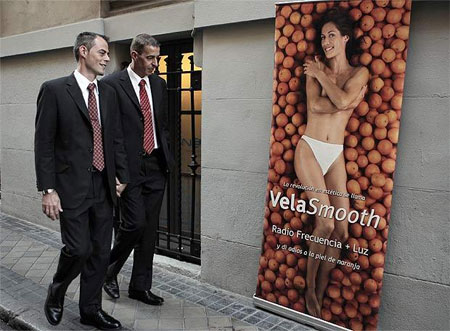 Cesar Cigliutti and Marcelo Suntheim, two of Argentina’s leading gay activists, are making international headlines for marrying in Spain today because their home country won’t let them. They plan to campaign for legal recognition of their marriage when they return to Argentina.

This is the bizarre photo of the couple published by Spain’s newspaper El País. Isn’t it romantic? I can’t think anything I’d rather do after my gay wedding than troll the streets of Madrid looking at billboards of scantily clad women.

The AP reports: “Cigliutti and Marcelo Suntheim were able to wed because Suntheim has dual citizenship in Argentina and Germany – allowing him to marry within the European Union. Spain began allowing same-sex marriages in 2005, granting gay couples the same rights as heterosexual ones to marry, adopt children and inherit each other’s property. Although Argentina does not recognize gay marriage, the Buenos Aires legislature approved a law in 2002 permitting same-sex civil unions, granting gay couples in the Argentine capital economic and family rights similar to those of heterosexual couples. Mexico City and some Mexican and Brazilian states also recognized these unions. Uruguay alone in Latin America legalized them nationwide.”