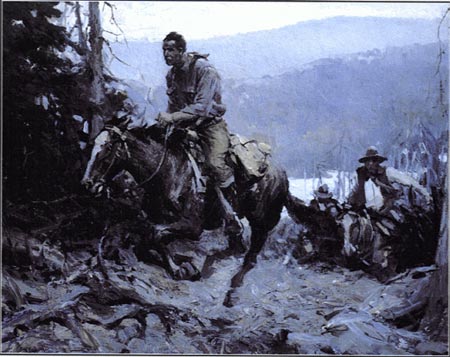 According to Harpers, George W. Bush has spoken out many times about his attachment to this painting by W.H.D. Koerner entitled “A Charge to Keep”. The President says it depicts “a missionary spreading the word of the Methodist Christianity in the American West in the late nineteenth century.”

Unfortunately, Jacob Weisberg, the author of a forthcoming book on the President, did a bit of research on the painting and discovered that it really depicts “a silver-tongued horse thief fleeing from a lynch mob.”

Writes Harpers: “The president of the United States has identified closely with a man he sees as a mythic, heroic figure. But in fact he’s a wily criminal one step out in front of justice. It perfectly reflects Bush the man. . . and Bush the president.”

Read all about it here