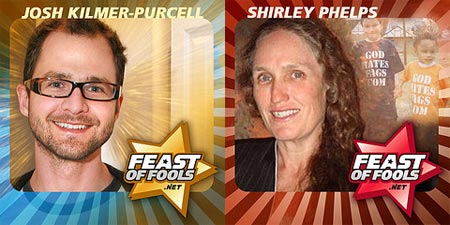 Josh Kilmer-Purcell talks to Shirley Phelps-Roper of Westboro Baptist Church on the latest Feast of Fools podcast (recorded before Heath Ledger’s death and their latest announcement to picket his funeral).

According to Feast of Fools, “Shirley Phelps of the Westboro Baptist Church presents TWO choices for America: ONE, imprison and then execute the gays because that’s what the Bible says or TWO, give gays all the same rights that every other American enjoys. Shirley states that you don’t get to base your discrimination against gays on the Bible’s morality if you don’t have the the determination to back it up. Which to reiterate is imprisonment and then death. There is no soft line stance. It’s black or white.”

Kilmer-Purcell recently set up a website, Phags for Phelps, contending that Westboro Baptist Church is the best message for tolerance out there right now. Says Kilmer-Purcell, “Fred Phelps and his Westboro Baptist Church family just might be the most important GLBT activists since Stonewall. Why? Quite simply, because they give homophobes a bad name. Unlike stealth homophobes, the Phelps clan don’t hide their repugnance under a bushel. Every time they appear on the nation’s television screens, they show millions of Americans just how ugly unadulterated bigotry is.”

Listen to the podcast here.