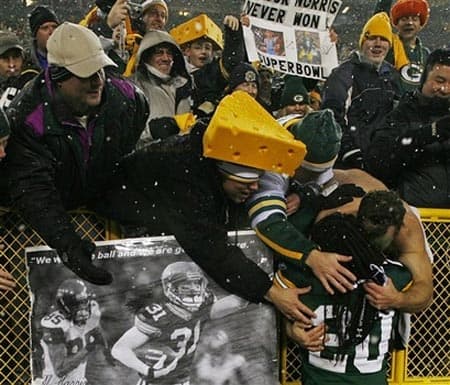 Gotta keep warm somehow. Near the end of Saturday’s Green Bay-Seattle NFL playoff game, Green Bay Packers Safety Atari Bigby made his way toward a special friend in the stands. 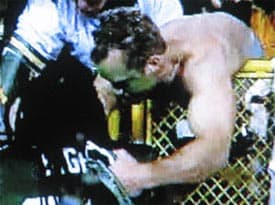 Outsports writes: “As Fox came back from commercial they showed a quick scene of Packers defensive back Atari Bigby going up to the stands to greet a totally buff fan (the guy was built!) wearing green face paint. Bigby and Green Man appeared to be on quite familiar terms. They hugged in a warm embrace that lingered and Green Man pulled Bigby back for one more, before Fox cut away. On NFL Network later, Rich Eisen said, ‘And Dreadlock man hugs shirtless man.’ The gay guys I was watching with slowed the moment down to a frame-by-frame on the DVR reminiscent of the Zapruder Film. We were wondering – Are they best buds? Is muscleman Bigby’s trainer? Did they meet the night before on Manhunt? Bigby is married with two small children, but we at least allowed our imaginations to go for a while. It sure beat watching a blowout.”

Not the kind of thing you usually see at a Packers game but eh, they were probably just two straight dudes caught up emotionally in the moment. Not that there’s anything wrong with that.