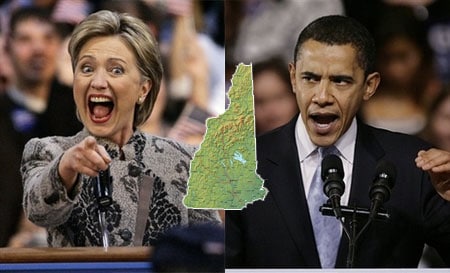 Senator Hillary Clinton defied media predictions to win the New Hampshire Democratic primary ensuring a lengthier battle for the Democratic nomination, which will ultimately benefit the voters. John McCain trounced his competitors in a resounding win over Mitt Romney on the Republican side. 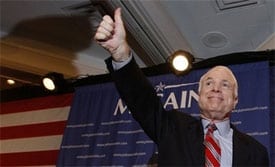 The NY Times reports: “The success of Mrs. Clinton and Mr. McCain followed their third- and fourth-place finishes in the Iowa caucuses last week. Mrs. Clinton’s victory came after her advisers had lowered expectations with talk of missteps in strategy and concern about Mr. Obama’s momentum after his first-place finish in Iowa. Her team is now planning to add advisers and undertake a huge fund-raising drive to prepare for a tough and expensive fight with Mr. Obama in the Democratic nominating contests over the next four weeks. Mr. McCain had pursued a meticulous and dogged turnaround effort: his second bid for the White House was in tatters last summer because of weak fund-raising and a blurred political message, leading him to fire senior advisers and refocus his energy on New Hampshire.”

Hillary Clinton: “I come tonight with a very, very full heart. And I want especially to thank New Hampshire. Over the last week I listened to you, and in the process, I found my own voice.”

Barack Obama: “I am still fired up and ready to go.”

The Democratic leaders Clinton and Obama left the state even on NH delegates, however. Via the AP: “Sens. Hillary Rodham Clinton and Barack Obama each won nine delegates in New Hampshire’s Democratic primary, followed by former Sen. John Edwards with 4 delegates, an AP analysis of primary results shows. All 22 of New Hampshire’s delegates to the national convention this summer have been allocated. Clinton and Obama won the same number of delegates, even though Clinton edged Obama in votes, because New Hampshire awards delegates proportionally, and the vote was relatively close. In the overall race for the nomination, Clinton leads with 187 delegates, including separately chosen party and elected officials known as superdelegates. She is followed by Obama with 89 delegates and Edwards with 50.” More on the delegate breakdown, including Republican numbers, here…

Here are excerpts from McCain’s speech and MSNBC’s analysis. MSNBC ripped McCain speech…”If this is your introduction to America in 2008, do not have your head down looking into a speech…(cackling) It looked like every advisor that he’d ever had had given him one paragraph, one sentence and he read them all…that he dropped them on the way to the podium and resorted them and read them in order…”

TPM: Making Sense of It…”What’s exciting about this, just speaking for myself, is that we’re now on to a solid month of campaigning before the big cluster of contests on February 5th. Both candidates have had a riveting win. We’ve got a real battle on our hands. And I do not think that any of Clinton’s critics can say that she won this one by overpowering Obama with money or mobilizing a dominating political machine or by expectations of inevitability and certainly not with the help of a friendly press. However you slice it this was a real victory under pressure. And if she’s the nominee she’ll be a much better one for it.”

Media blew it: “This should be seen as downright liberating to the 48 states which have not voted yet. Because it means that everyone who hasn’t yet voted should now rightfully conclude: “Those guys don’t know what they’re talking about. I’m voting for who I really want to win. Who knows, maybe they will!” To paraphrase (no relation to Hillary, of course) the immortal words of George Clinton: Free your mind, and your vote will follow.”