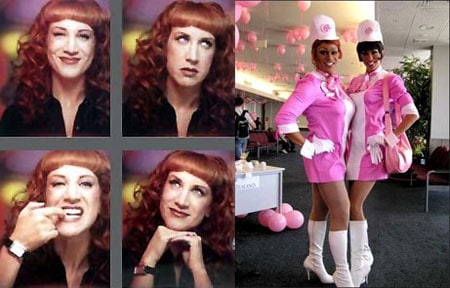 Air New Zealand has hired Kathy Griffin to host its one-flight-only “Pink flight” from San Francisco to Sydney, taking passengers to the city’s Gay & Lesbian Mardi Gras on February 26th. As part of her in-flight duties, she’ll perform a stand-up show and mingle with the passengers and drag queen flight attendants. The flight aboard the Boeing 777, of course, is going to be taped for My Life on the D-List. 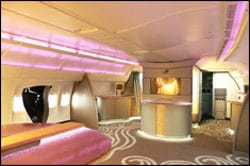 Said Roger Poulton, Air New Zealand’s vice president: “We knew that this party needed a hostess befitting of the eclectic and diverse group we are inviting on board for this celebration, and who better than Kathy Griffin? Her sense of humor strikes the right chord for the Pink Flight’s spirit, and we anticipate a great show.”

According to the airline, “Pink Passengers are encouraged to show up at the airport ready to party.” They write: ” In addition to Kathy’s performance, the Pink Flight will boast a full program of entertainment – such as live performances from drag queens, on-board music, contests and screenings of classic gay-themed films on Air New Zealand’s digital in-flight entertainment system (IFE). Because it is an overnight flight, there will also be a period of scheduled ‘Beauty Sleep.’ Additionally, passengers will enjoy the excellent cuisine Air New Zealand is known for with a Pink Twist, Pink cocktails, goodie bags and a “Party Party Wake-Up” before landing.”

The flight is 14 hours long. Looks like there are still a few seats available in premium economy.

Check out all the info and book tickets at Air New Zealand Pink Flight.

Previous Post: « The Eye of Ivan
Next Post: Romney Unstapled: I Do Not Have Lobbyists Running My Campaign »