Box Turtle Bulletin takes a look back at ONE, the nation’s first gay magazine to be shipped through the U.S. mail. ONE was founded by the early gay rights group the Mattachine Society of Los Angeles and had an early subscriber base of around 2,000 people: 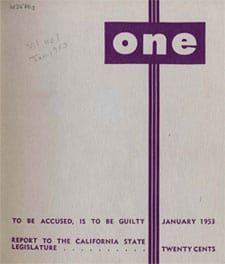 “By today’s standards, an early edition of ONE might look rather tame. There were no racy pictures, and even its fiction was mostly limited to depictions of longing and desire. There was rarely any evidence of physical contact in its pages. But what the magazine lacked in raciness, it made up for in audacity. ONE’s editorial tone was bold and unapologetic, covering politics, civil rights, legal issues, police harassment (which was particularly harsh in ONE’s home city of Los Angeles), employment and familial problems, and other social, philosophical, historical and psychological topics. And most importantly, ONE quickly became a voice for thousands of silent gays and lesbians across the U.S., many of whom wrote letters of deep gratitude to ONE’s editors. But in a sign of those times, all letters to the editor were published anonymously — from “m” in Winston-Salem, North Carolina or from “f” in Beaumont, Texas. ONE filled a very critical role for gays and lesbians during a very dark time…”

ONE debuted in 1953, it wasn’t sent out by mail until 1958, following the Supreme Court’s pro-gay ruling on “ONE Inc. v. Olesen, a landmark decision that allowed a magazine for gays and lesbians to be sent through the U.S. mail.”

Today In History: A Spunky ONE And The U.S. Post Office [box turtle bulletin]