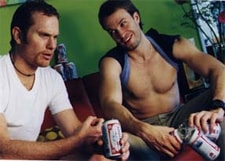 “The researchers got the flies drunk on the fumes of an ethanol-doused cotton pad placed at the base of the chamber, and filmed them using a camera held above the Flypub’s transparent ceiling. Male Drosophila will normally only court females, following them and vibrating their wings in a courtship ‘song’, before attempting to copulate. The first time they were exposed to alcohol, groups of male flies became noticeably intoxicated but kept themselves to themselves. But with repeated doses of alcohol on successive days, homosexual courtship became common. From the third day onwards, the flies were forming ‘courtship chains’ of up to five amorous males.”

The temperature-triggered release of the brain chemical dopamine was identified as the key element behind the change in behavior.

Check out the videos here.