This week Towleroad correspondents Josh and Josh caught up with noted author Tom Dolby as he began the book tour for his second novel, The Sixth Form. Already a successful author after his debut novel, 2005’s The Trouble Boy, which focused on the coming of age of a twenty-something gay man in Manhattan, Dolby’s second book follows the story of two friends, Ethan and Todd—one straight and the other discovering he may be gay—as the duo navigates the halls and traditions of their final year of boarding school. But all bets are off when Hannah, an alluring and mysterious teacher, is thrown into the mix.

Todd and Ethan have quite a few adventures while at Berkley School. Were your years at Hotchkiss as adventurous as theirs?

Some of the stuff that happens in the book is inspired by [my years at boarding school], in terms of rituals and rhythms of what happens in the course of a school year, like the carnations at Valentine’s Day, dances, and the importance of long winter weekends. I definitely had intense crushes, too, but I never acted on any of them.

And, of course, the student-teacher relationship is fictional, but that kind of thing does happen. It’s pretty rare, but it happens. You have these schools out in the middle of nowhere and sometimes there’s not a big age difference between a teacher and the kids, who are sometimes sexually precocious. A good teacher will set boundaries—but Hannah is an example of a teacher who is not setting boundaries. 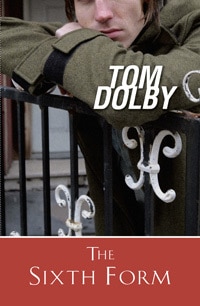 The Sixth Form has a darker tone and plot than The Trouble Boy. Are we going to be seeing a darker Tom Dolby in the future?

After I finished The Sixth Form I realized, “Wow, I’ve written a pretty dark book” and I wanted to write something that was maybe dark, but funny dark. There’s unexpected humor in The Sixth Form, but it does have its dark and serious moments.

The book I’m working on now is much lighter and funnier. It’s set in California and focuses on a family. There has been this tangential theme in my past books with characters going home to visit their families and I realized I really liked writing those scenes. There is a lot of humor to be mined from those situations. I’m still very much in the beginning stages of that project—maybe on page 100 at this point.

We noted that The Sixth Form is dedicated to Drew. Who’s Drew?

Drew is my boyfriend. This summer, as the deadline was approaching to submit the final draft [of The Sixth Form], I made some drastic revisions and he was just amazing—I think he read four different drafts in a week. And of course that’s not the only reason it’s dedicated to him, but it absolutely would not have been the same book without his help. When doing book tours you’re surrounded by people, but they’re strangers, and so it’s nice to have someone at the end of the evening to ask how it went. It’s really nice to do [a book tour] with a boyfriend or partner.

Want to win an autographed copy of The Sixth Form? Correctly answer the trivia question after the jump and it could be yours!

Tom Dolby’s first book, The Trouble Boy, featured a scene after aparty in which an up-and-coming public relations girl hits a pedestrianwith her SUV. Some media outlets have speculated that this characterwas based on publicist Lizzie Grubman, whom authors Candace Bushnelland Melissa de la Cruz have also renamed and cast in their novels. Whatis the name of Tom Dolby’s public relations character, the girl withthe “straightened hair and obvious nose job” who has problems withrunning over unsuspecting passersby?

Be the first to answer the question correctly in this post’scomments section and the book is yours! Be sure to include your e-mailaddress when you submit your answer so Towleroad can get in touch withyou if you win.