You may remember that five years ago former Attorney General John Ashcroft told the gay group ‘Department of Justice Pride‘ that it could not hold an official gay pride celebration because the department could not sponsor events without an official declaration form the President. “The group also was told it could not post notices of general meetings and events on department bulletin boards,” the Washington Post notes. 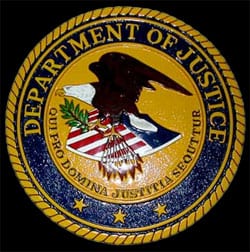 It was a policy that Alberto Gonzalez kept in place during his years as Attorney General. Now, AG Michael Mukasey has reversed the policy:

“Mukasey informed leaders of DOJ Pride last week that the department would give it the same rights as all other DOJ employee organizations, said the group’s president, Chris Hook (above, left). In a statement, Mukasey said the department will ‘foster an environment in which diversity is valued, understood and sought” and maintain “an environment that’s free of discrimination.'”

Added Hook: “I do not know of any other employee-recognized groups that were denied access under these same conditions. [As a result of] what some would term a hostile environment for lesbian, gay, bisexual and transgender employees, the membership rolls have suffered. As you can imagine, it is difficult to let employees know of the group’s existence when they are not informed of it in official department literature, or only through word of mouth.”

Here’s how it went down: “After Mukasey took over the department late last year, the group wrote to him to complain about its treatment. Hook said Mukasey met with group leaders, signed the new policy that allowed bulletin board postings, and agreed to host the pride celebration in one of the department’s main halls. ‘He has gone out of his way to ensure that the department has a new air of inclusiveness and an open and welcoming environment for all employees,’ Hook said.”