Gavin Newsom appeared at a “town hall” event on Monday night in San Francisco with Bill Clinton, and today primary eve comments on the Clinton-Newsom relationship (or rather the chill between Newsom and Barack Obama) by former San Francisco mayor Willie Brown have irked gay Obama supporters. 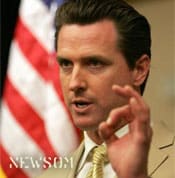 Brown reminded the SF Chronicle of a fundraiser he held for Obama at which Newsom was present, shortly after Newsom’s controversial decision to allow the city to begin issuing marriage certificates to same-sex couples. Said Brown to the Chronicle: “I gave a fundraiser, at his (Obama’s) request at the Waterfront restaurant. And he said to me, he would really appreciate it if he didn’t get his photo taken with my mayor. He said he would really not like to have his picture taken with Gavin.” 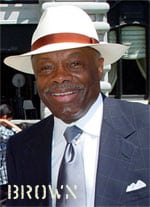 The Chronicle adds: “‘I think he has harbored this resentment for years,’ Brown said of Newsom, adding that Obama was reluctant to be seen appearing in San Francisco altogether, much less side by side with the gay-marriage mayor. ‘I would guess that is part of the rejection of the Obama campaign.’ Though same-sex marriage is still a hot-button issue in 2008, it is no longer the shocker that had the country in an uproar four and five years ago. Until you go back and look at the news stories from those days, it is easy to forget how radical and unpopular Newsom’s stand was. And, no, it wasn’t just the right-wingers who were upset. It was Democrats, too, particularly those running in the presidential primary. John Kerry, for example, was careful to stage his Bay Area appearances in Oakland, not San Francisco, after the controversy hit. ‘I don’t know anybody in the party who was happy with him, except me,’ Brown said. ‘He was all alone out there. He was the poster child for same-sex marriage worldwide.’ That’s why Brown says he doesn’t blame Obama for his caution. Today, of course, the Illinois senator is happy to embrace gay causes. But in 2004, nationally, same-sex marriage was a radical notion. ‘What they ought to say is, ‘Damn right I did it, and I’d do it again,” Brown said of the Obama camp. ‘He was in a race for the Senate, and I am guessing that downstate Illinois is a pretty red (meaning conservative) group of voters.'”

Obama supporters, like his gay deputy campaign director, Steve Hildebrand, call it “a ridiculous story.” Said Hildebrand: “Barack Obama gets his picture taken with gay people all the time. Including me, his deputy campaign manager. They could attack Obama for a lot of things, but this isn’t one of them. And for this to pop up on the eve of the election is very suspicious. There’s just no truth to it.”