Ben Smith at Politico reports on a question and answer session at a Barack Obama rally in Beaumont, Texas yesterday: 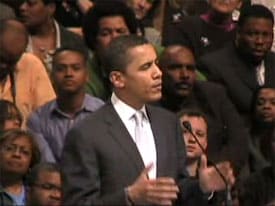 “An interesting moment came when he was asked a question about LGBT rights and delivered an answer that seemed to suit the questioner, listing the various attributes — race, gender, etc. — that shouldn’t trigger discrimination, to successive cheers. When he came to saying that gays and lesbians deserve equality, though, the crowd fell silent. So he took a different tack: ‘Now I’m a Christian, and I praise Jesus every Sunday,’ he said, to a sudden wave of noisy applause and cheers. ‘I hear people saying things that I don’t think are very Christian with respect to people who are gay and lesbian,’ he said, and the crowd seemed to come along with him this time.”

Adds Smith: “The moment reminded me of a conversation I had recently with a senior figure in the national gay rights movement, who noted that Obama’s deference to some black Christian discomfort with homosexuality — his refusal to dump the “ex-gay” gospel singer Donnie McClurkin from a tour — angered some gays and lesbians; but conversely, that his ability to sell gay rights in the black church is unique and appealing.”