Yesterday I posted about an article in The New Yorker about the late Episcopal Bishop Paul Moore, Jr. written by the bishop’s daughter. You can now read the touching remembrance by Honor Moore in its entirety online. Here’s an excerpt: 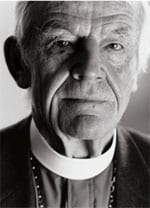 “Early in the winter of 1986, I went to an AIDS memorial service at the cathedral. It was a requiem, and as part of the liturgy the names of the dead were recited, a process that took more than an hour. As I listened, I heard the names of friends, actors and poets and artists I had known, and then my father preached. In his crimson chimere and white rochet, he climbed the pulpit and began. It was a sermon about sexual freedom, about the lives these dead men had lived, about the presence of Christ’s sacrifice in human suffering. This was not a new subject for him, but I had never heard him so fierce, so passionate, so loving. What came to me was this: Here is where I can come to find my father’s love. There is, I told myself, magnificence in how he can give, opening his long arms, practically weeping on behalf of these men, dead of a plague; here is where I can come to be close to my father.”

The Bishop’s Daughter [the new yorker]