Larry Sinclair, the man who posted a video to YouTube in late January claiming that he and Barack Obama had engaged in drug use and oral sex in 1999, submitted to two polygraph tests over the weekend. According to WhiteHouse.com (not associated with the U.S. Government) which facilitated the testing, there was deception indicated in both tests: 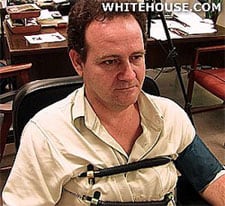 “Dr. Ed Gelb, Former President of the American Polygraph Association was the Polygraph expert selected by Whitehouse.com. He has done over 30,000 polygraph examinations over his long career. There were two polygraph tests administered by Dr. Gelb on Friday. the first polygraph asked Mr. Sinclair on his sex claims. The second polygraph test asked Mr. Sinclair on the drug use claims…It was our intention to get to the truth in this serious matter rather than have these allegations that were made almost a month ago drag on to election day. Due to the seriousness of this issue we made the results public today rather than waiting until Monday when we would have received the second expert’s conclusions.”

Late last week, after the John McCain lobbyist, right-wing pundit Bill O’Reilly suggested that there were Democratic scandals the mainstream media was refusing to report on. If this Sinclair nonsense was what O’Reilly was intimating, this test likely took some wind out of those sails.

Previous Post: « Hillary Clinton on Attack Over Obama Mailers; Barack Responds
Next Post: Rick Perry: If Homosexuality Isn’t About Sex, Call It Something Else »