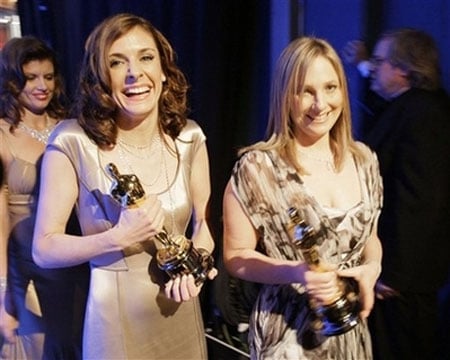 Overall, I thought the Oscar telecast was pretty sluggish, though I was pleased with pretty much all of the winners, particularly Cynthia Wade (left) and Vanessa Roth’s Best Documentary win for Freeheld, the story of terminally-ill cancer patient Laurel Hester and her dying battle to have her pension awarded to her female partner of six years. I posted about her courageous story quite a few times on this blog. It was gratifying to see these filmmakers win and definitely the ‘gay moment’ of the evening (aside from Scott Rudin’s shout-out to his partner, “honey”). 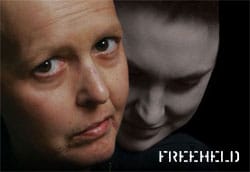 Backstage, after accepting their award, Wade told the media: “I was so moved by the story that I asked my husband to juggle two children, one four months, one five years, and his full time job so I could live with Laurel and Stacie for the last ten weeks of life. Laurel and Stacie helped changed laws in six counties in New Jersey, the ability to win the right for Stacie to have the pension. And nine months after, New Jersey passed the Civil Unions Act ensuring that all couples received the rights. I would say getting involved with a documentary is a marriage. You look at the best subject matter in the face and you say, ‘in sickness and in health, for better or worse. I will be completely committed to you.’ You film the subject matter and you live, breathe, eat, and sleep it for years, and it becomes one of your most valued relationships.”

Also, did anyone else notice that Brad Renfro was left out of the ‘in memoriam’ clip montage?

See Wade and Roth’s acceptance speech AFTER THE JUMP, along with the trailer for Freeheld and a FULL LIST of the Academy Award winners.

BEST ADAPTED SCREENPLAY
Paul Thomas Anderson, “There Will Be Blood”
Christopher Hampton, “Atonement”
Ronald Harwood, “The Diving Bell and the Butterfly”
Joel Coen and Ethan Coen, “No Country for Old Men”(Winner)
Sarah Polley, “Away From Her”

BEST CINEMATOGRAPHY
“The Assassination of Jesse James by the Coward Robert Ford” Roger Deakins
“Atonement,” Seamus Mcgarvey
“The Diving Bell and the Butterfly,” Janusz Kaminski
“No Country For Old Men,” Roger Deakins
“There Will Be Blood,” Robert Elswit (Winner)

BEST FILM EDITING
“The Bourne Ultimatum,” Christopher Rouse (Winner)
“The Diving Bell and the Butterfly,” Juliette Welfling
“Into the Wild,” Jay Cassidy
“No Country for Old Men,” Roderick Jaynes
“There Will Be Blood,” Dylan Tichenor

Previous Post: « Rearview Mirror: Looking Back at the Week on Towleroad
Next Post: Oscar Red Carpet: When Gary Busey Attacks »